It Only Takes a Spark 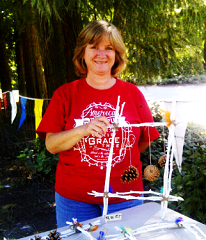 It was a slow day at the craft table at Special Friends Day Camp. Lisa waited patiently for campers to come and join her but it seemed no one was biting. Lisa’s hopes began to rise as she saw a camper, who had not done a craft all week, approach the table with her “Buddy” (a Special Friends Camp Counselor). Unfortunately, the buddy just needed a bathroom break and was asking if her Special Friend could wait with Lisa.

The camper sat down next to Lisa and began coloring. Lisa took the opportunity to try coax the camper into the day’s craft, gluing buttons onto a whimsical tree to make its leaves, but the camper would have nothing to do with it. She was quite content with her coloring.

And then Lisa found her way in. She proposed that the camper color her tree before gluing the buttons on. Wildly clapping and smiling, the camper agreed to the compromise. By days end, the camper had completed three of the week’s art projects.

Lisa dedicated her whole summer to volunteering at Warm Beach Camp. You would not have known that she had never led in crafts projects or worked with adults with special needs before. In fact, Lisa said “If it wouldn’t have been for the Camp, I never would have had an experience like this.”

Lisa admits that when she first found out that she would be the craft director for Special Friends Day Camps, she was a little intimidated. But, through some recent difficult life circumstances just before coming to Camp, the Lord showed Lisa that compassion is something everyone needs. “I would do it again in a heartbeat” Lisa said. “When you have a positive volunteer experience like this, it has a way of moving you on to the next thing the Lord has for you!”