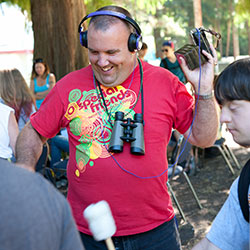 I scan the Camp in my mind’s eye and I see so many faces.
Faces filled with compassion, trust, and willingness.
Willing to be more gentle than normal, more patient than average, more loving than this life usually requires.

At Special Friend’s Camp, Counselors and Campers are paired at a ratio of 1:1 for the entire week of Camp. Campers with higher mobility needs may be paired with 2 or more counselors. This provides a consistent and personal relationship environment that encourages Campers and Counselors alike to grow in their love for Jesus and each other.

I look over at an old picnic table in the long house at Chinook and I see a beautiful teenaged girl who has struggled long and hard with self-esteem issues and never feeling good enough. What I see as I watch her with her camper now is tenderness, joy, freedom found in serving someone who has been down a similar road in a very different way. I hear laughter and see glitter nail polish on hands that would fit a five year-olds glove. It’s beautiful.

I walk by the Music Station and see a man beating out a rhythm that has been spinning round and round in his head some 50 plus years. But he’s not in a corner, being avoided or gawked at, he’s in the middle of a ‘band’ that has formed around him. Seated at the drum throne, armed with his drumsticks, he beats out the foundation for a cacophony of sound that you would think was a symphony by the look on the faces of those taking part. Humming from deep in the throat. Banging of symbols. The tinkling of triangles suspended from above. And every once in a while there is a shriek of sheer delight that escapes the mouth of one that looks as if perhaps they didn’t know a sound was even being made.

The beauty of lives laid down, of people set free to be who they were made to be.