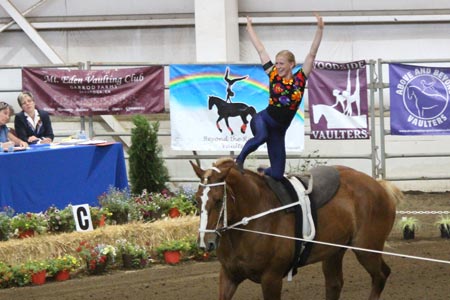 Have you ever seen equestrian vaulting in person? If not, you have truly missed out on one of the more amazing and unique horse sports you’ll ever watch. Vaulting is the sport of dance and gymnastics on the back of a moving horse. Vaulting is performed both individually and in teams of up to six people with up to three on the horse at one time performing choreographed routines to music.

The Warm Beach Vaulters’ dreams to compete in international competition in Europe is becoming a reality this year. Four vaulters are planning to compete in Ermelo, The Netherlands, August 5-9, 2015. Anna Erickson and Daniel Janes will be competing in an open competition, while Kaleb Patterson and Luke Overton hope to represent Team USA in the first ever Junior World Championship Vaulting Competition. Kaleb and Luke must first qualify through a selections process that takes into account their scoring from competitions that occur in the US and Canada.

Junior Worlds as well as Vaulting World Championships and the World Equestrian Games offer vaulters the opportunity of a lifetime – representing the United States as well as their home club on a world stage. We are humbled and grateful to support these athletes as they follow their dreams as far as they can. These athletes have more in mind than just competition and world travel. Kaleb Patterson has many reasons for aiming for Junior Worlds, most important being: “I want to spread the light of Jesus Christ across the world. I feel that is my mission from God, my mission field that I want to take head on. I want to show vaulters across the world what the true love of the Holy Spirit looks like.”

The Warm Beach Vaulters have a fundraising dinner and performance for these European-bound athletes March 16 at The Restaurant at Rhodes River Ranch. Tickets are available at http://bit.ly/VaultingFundraiser. European competition is the culminating experience for young athletes that have generally spent six to ten years perfecting their skills. We are so pleased to have such highly committed young people who serve as ambassadors not only of their country and their club, but also their faith lived out in love.
You can also follow the Warm Beach Vaulters on facebook at www.facebook.com/warmbeachvaulters or on the web at www.warmbeachvaulters.com.