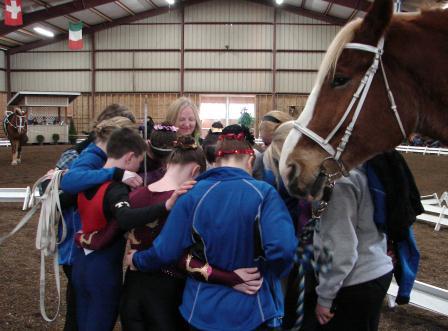 For about 80 Northwest vaulters, the Winter Warm Up Fest is a competition weekend of “firsts.”

All winter long, vaulters refine their compulsory move skills, experiment with new free-style routines, and stretch their limits of physical conditioning.  For some, this is their first competition ever and for others the first competition at a new level. The first competition of the Spring is a chance to see the fruits of a long winter of preparation.

Warm Beach Vaulters were blessed to win first place in all but two rounds of competition and there they won second place.  Vaulting is a team sport with every vaulter supported by parents, horses, lungers, coaches, and fellow vaulters.  Such a strong showing at the first competition of the season is a tribute to the dedication of each vaulter and the team of supporters that surround them.

Warm Beach Vaulters comprise nearly half of any regional competition they attend.  Their positive influence, uplifting attitudes, and support to other clubs contribute mightily to the strength of the region.  Even more important than their accomplishments in the vaulting ring is the influence they have as God’s love shines through these amazing athletes, coaches, and staff.

The next competition is May 28-29 at Fallbrook Farms in Hillsboro Oregon and then Regionals June 18-19 at the Washington State Horse Park in Ellensberg, WA.  We hope to see you there!