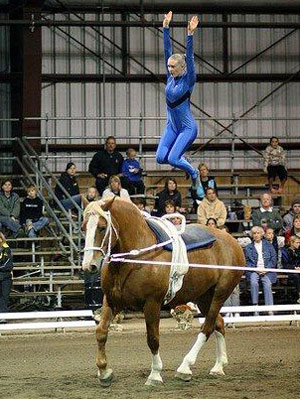 Coach Patti Skipton received the “2009 Trainer of the Year” award in recognition of her outstanding horse training ability. Nancy Stevens-Brown, AVA past president told Patti, “I am giving you this award because your horses always look so happy when they compete.” Patti will also be coaching the Friendship Team at the World Equestrian Games held at the Kentucky Horse Park this fall in Lexington Kentucky.

“I was so surprised at first. I really didn’t expect it. It was an awesome way to end my vaulting career, since I’m off to university now,” said Kimberly.

“Winning two times in a row was really exciting and showed that I earned may way to the Silver level,” said Kaleb.