A Horse Camp Which Stands Apart 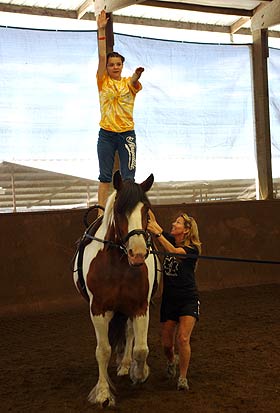 Warm Beach Camp hosted its 4th year of Equestrian Vaulting Camp this summer. Vaulting is the sport of gymnastics and dance on the back of a moving horse. Since coming to the United States in the 1970s, vaulting has gained popularity and will be featured at the World Equestrian Games in Lexington, Kentucky, this fall. WBC’s Vaulting Camp attracts more campers from out of state then any other program offered during the summer. Some of this year’s camp attendees have journeyed from Vancouver, BC, Florida, and South America in order to attend.

The Vaulting programs offered by WBC hold several main attractions. For starters, the camp owns over 55 horses, six of which are used solely for vaulting. Those who attend get to spend extensive time working on group and individual vaulting training with Coach Patti Skipton. Coach Skipton has over 30 years coaching experience and was awarded Trainer of the Year by the American Vaulting Association in 2009. Other camp activities include swimming, ropes course and a climbing tower.

Two campers coming all the way from Columbia, South America discovered WBC on the internet.

[quote author=””]We were both looking for a vaulting camp and were searching the internet. I just typed in summer vaulting camps and Warm Beach Camp was one of the first ones to pop up. So we saved the money for the camp and our parents paid for the plane tickets.[/quote]

It is apparent that a blend of great coaching, beautiful camp grounds and a loving environment has made WBC the ideal place to learn this emerging sport.