On March 28-29, 2014, over 125 vaulters from clubs as far away as Alberta and California converged on the NW Washington Fairgrounds in Lynden for the “Vault into Spring Competition” hosted by the Warm Beach Vaulters. For some vaulters, this was their first competition ever. For other vaulters, this was the first selection trial for World Equestrian Games in Normandy, France.

As the host club, the Warm Beach Vaulters rallied amazing support from parents and friends. Over 50 club volunteers helped with everything from clerking for judges to intense amounts of office work to lunging horses for vaulters.  Warm Beach vaulters competed in nearly every class offered from barrel and trot classes to gold and A-Team classes. We are so thankful for a safe competition where the vaulters were able to perform the moves and routines they’ve been practicing all winter and gauge where they need to focus their efforts as the make their way toward Nationals. 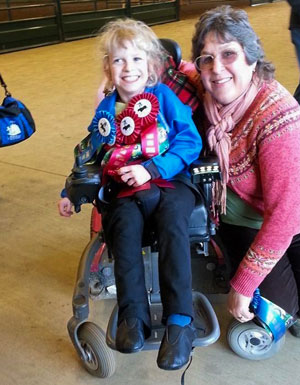 Ashley and Carolyn – all smiles!The Warm Beach Vaulters club had twelve brand new vaulters competing for the first time. Club Head Coach, Patti Skipton said, “the most touching memory for me was seeing young Ashley be lifted out of her electric cart to perform in the modified barrel class designed specifically for disabled vaulters.” Patti went on to share, “I’m so pleased with the amazing way our families work together under the covering of God’s love to get everything done while living and expressing His love in all their relationships.”

As a sport, Equestrian Vaulting has so much to offer – Athleticism, creativity, music interpretation, costuming, and of course, horses and horsemanship. Plus, working together with teammates over a period of months and even years teaches life skills such as, teamwork, communication, respect, empathy, responsibility and so much more.

We are looking forward to this year’s competition season. The whole club will be going to Eugene, Oregon, for both regional competition in June and national competition in August. The A-Team is travelling to the greater Los Angeles area for competition at the end of April. Three vaulters, Anna Erickson, Daniel Janes, and Kaleb Patterson are working through the selection trials hoping for placement on Team USA for the World Equestrian Games being held in Normandy France at the end of August and early September.